In an era of income inequality, environmental degradation, and racism, our chapters in Lynn, Worcester, Springfield, and Holyoke are building the power to confront this triple crisis in Massachusetts. We fill the ballot box with our votes.  We fill the streets with our voices. We seed the new alternatives that put power and decision-making in the hands of those directly affected.  We know that a better world is possible and that we are the ones who will build it.

Neighbor to Neighbor quickly shifted to aid our communities, connecting residents to essential resources and assistance. We are spearheading a Mutual Aid database and a Neighborhood Point Person Program to ensure that residents are not left behind or neglected during physical distancing. Throughout the last few weeks, we’ve built on our community networks so that […]

Voter empowerment, for us, is not just about getting people out to vote— it is about using our power to transform government into a democracy.

In 2014, we closed the last coal plant in the state. Now, with 40,000 tons of toxic ash seeped into our water and our farmlands, we continue the fight to ensure a thorough clean-up of the site and new jobs for Holyoke.

We also show up for Black Lives Matter, the Fight for $15, and other movements on the path to liberation.

Stopped a polluting biomass plant proposed in Springfield, MA, which already has some of the highest asthma rates in the country.

Launched our first community garden in Holyoke in response to the impacts of COVID-19 and food insecurity, and to ground the community in resiliency, land, and environment.

Earned sick time for all workers in Massachusetts, allowing 1 million more people to take time off when they’re sick or need to care for a family member.

Shut down the state’s last coal plant, which had contributed for years to Holyoke’s poor air quality and high rates of asthma.

Lynn parents secured translation & interpretation for all parents and guardians in the Lynn Public Schools.

Expanded public transit in gateway cities, increasing the number of buses and trains to get our people to work and to school.

An historic civil rights victory that made Massachusetts the 2nd state in the U.S. to prohibit employers from asking about a person’s criminal history on an initial job application.

The most progressive tax reform in Massachusetts since World War II, eliminating the capital gains loophole as part of a fair tax package worth over $1 billion in new revenue.

Since 1996, we have increased voter engagement by 50% in the lowest-income districts in our cities, and by 400% in neighborhoods with historically low voter turnout.

Our Theory of Change 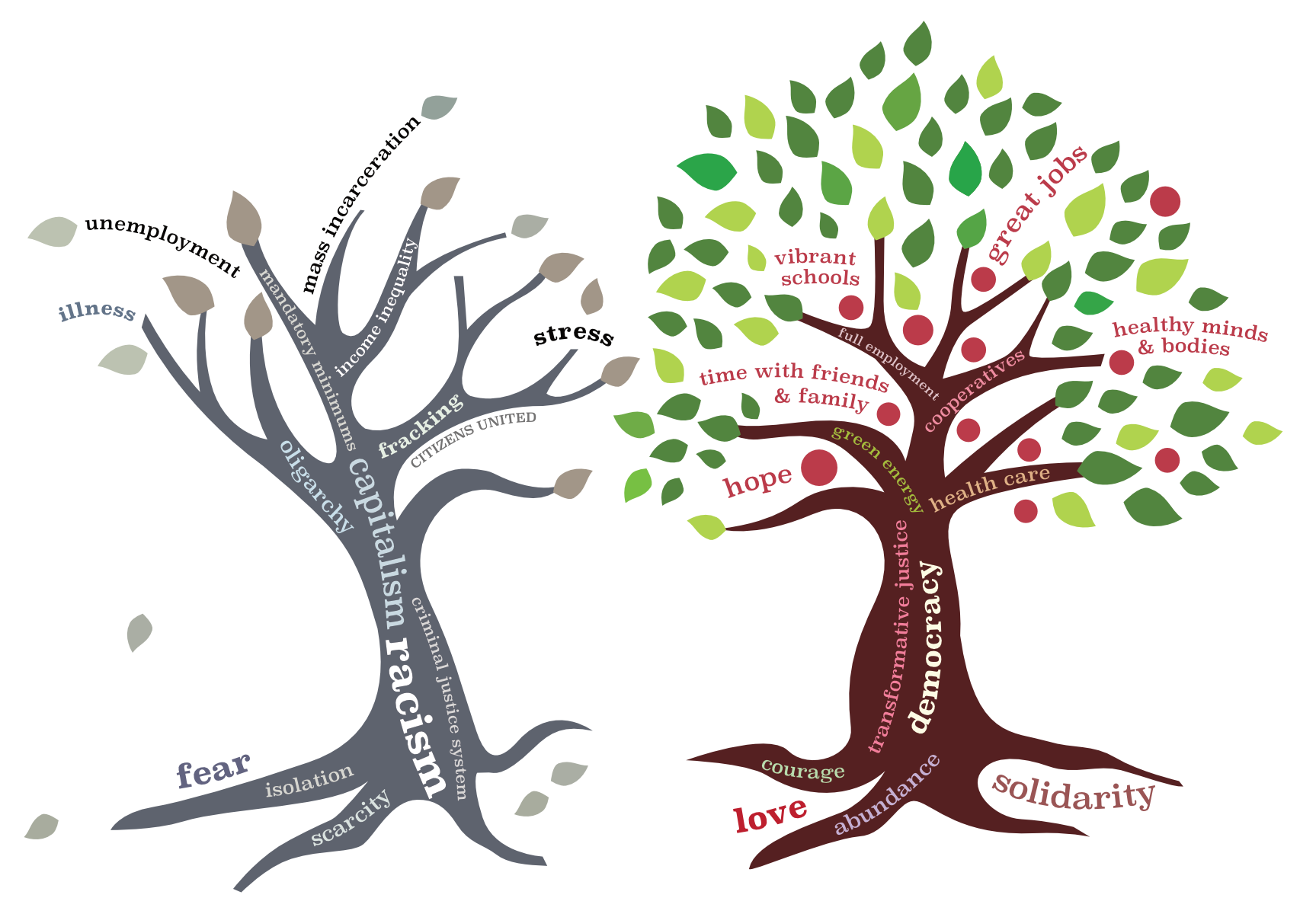 We view our society as a tree, rooted in particular values and beliefs. Out of those roots grow systems, such as our government and our economy (the trunk), whose policies and programs (the branches) yield the reality of everyday life in our communities (the fruits).

If we are to change our lives, we must change our society, from the roots up. We seed the powerful values of love, gratitude, imagination, courage, solidarity, abundance, and integrity through our chapters and our campaigns, transforming our government and our economy to remake reality in our communities.