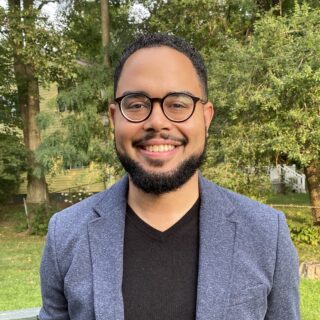 Like many immigrants, Elvis grew up with a foot in two worlds. Born in a poor barrio in Dominican Republic, where he spent his childhood summers, and working after school selling beepers at his parents’ store in a working-class suburb of Boston, Elvis understood early on the interconnected systems that oppressed and governed the lives of his loved ones. He became further politicized by the rich tradition of South American leftist movements passed on by community elders, and his involvement in anti-racism and anti-war organizing.  Elvis has dedicated his life to finding a way to repay the unfathomable kindness shown to him and his family by other working-class and immigrant families through his organizing for systemic change. That journey has led Elvis to work for several dynamic organizations including as an Organizer for Warehouse Workers for Justice, Coordinator and Director of Organizing for the Immigrant Worker Center Collaborative, and Lead Organizer for the National Guestworkers Alliance among others. Choosing to work only in efforts that can materially improve the lives of marginalized communities while pushing the boundaries of the politically possible, Elvis came to Neighbor to Neighbor. Elvis is leading the long term work of redeveloping the organization’s organizing and political strategy to aid in both the dismantling of systems of oppression and the creation of new systems for liberation. He has a Bachelor’s degree in Social Thought and Political Economy from University of Massachusetts Amherst and is completing his Masters of Science in Labor Industrial Relations. He is blessed with a wonderful wife, a tremendous organizer in her own right, and beautiful daughter and future troublemaker (politically he hopes). They live in Western Massachusetts.